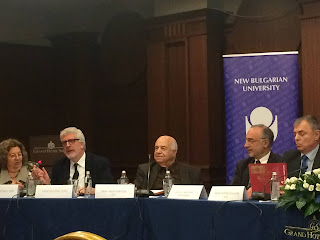 "Nothing affected [Klein and me] as profoundly in the years in which our minds took their lasting directions as the thought of Heidegger. This is not the place for speaking of that thought and its effects in general. Only this much must be said: Heidegger, who surpasses in speculative intelligence all his contemporaries and is at the same time intellectually the counterpart to what Hitler was politically, attempts to go a way not trodden by anyone or rather to think in a way in which philosophers at any rate have never thought before. Certain it is that one has questioned the premise of philosophy as radically as Heidegger. While everyone else in the young generation who had ears to hear was either completely overwhelmed by Heidegger, or else, having been almost completely overwhelmed by him, engaged in well-intentioned but ineffective rearguard actions against him, Klein alone saw why Heidegger is truly important: by uprooting and not simply rejecting the tradition of philosophy, he made it possible for the first time after many centuries—one hesitates to say how many—to see the roots of the tradition as they are and thus perhaps to know, what so many merely believe, that those roots are the only natural and healthy roots. (...) Klein was the first to understand the possibility which Heidegger had opened without intending it: the possibility of a genuine return to classical philosophy, to the philosophy of Aristotle and Plato, a return with open eyes and in full clarity about the infinite difficulties which it entails". (Leo Strauss, “An Unspoken Prologue”)
- noviembre 06, 2015